If you want to learn in depth about cap rates, take advantage of our free Truly Understanding Cap Rates webinar video replay

Commercial real estate cap rates are a reflection of the overall interest-rate environment in that the percentage yield on an income-producing property Purchase Price that the market will command is influenced by other available investment yields and the nature, length and risk profiles of those investments.

For instance, if I have investment capital and I  have flexibility as to where I deploy that capital with respect to asset classes (stocks vs. bonds vs. real estate vs. venture capital, etc.), I essentially have a menu of options, each of which is unique from a risk perspective, and each of which has its own yield characteristics.

To use an extreme example, if I were to purchase the office building in which the U.S. Treasury sits, this would basically be the safest possible commercial real estate investment I could make, because (while it seems comical) in the most dire of circumstances the Treasury could always print more dollars to pay the rent.

Every other possible commercial real estate investment is relatively riskier than the one just described, which is essentially a Treasury Bill in the form of a building. So one would expect that for all other properties which have non-U.S. Treasury tenants, property purchasers would demand a return somewhat higher than that of a T-Bill to compensate for the additional risks in the cash flows, which can be assigned to multiple categories as shown below. 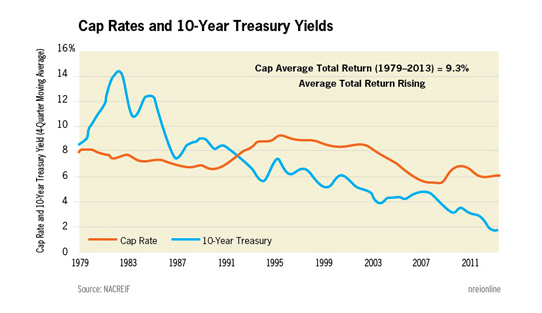 Cap rates vs. Treasuries over the last 30+ years.

From 1979 until around 1992, we see privately owned real estate cap rates were in fact lower than 10-Year Treasuries. This was primarily due to the the bidding up of real estate prices as properties were a hedge against inflation during a very inflationary period.