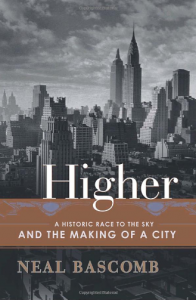 I took advantage of some downtime over the last week to read a book that has been on my list for a while, Higher: A Historic Race to the Sky and the Making of a City, by Neal Bascomb. The book tells the history of the development of three New York City icons, 40 Wall Street, The Chrysler Building, and the Empire State Building, in the late 1920s / early 1930s.

It is a well- written, interesting read, and I recommend it to those who have a curiosity about the origins of skyscrapers as real estate prototypes, as well as the origins of the Manhattan skyline. It focuses mostly on the design and construction elements of the development process in addition to telling the colorful stories of the developers, architects and builders, touching upon finance only when needed.

One of the most fascinating things that I learned was that the Empire State Building, comprising 3 million square feet and 102 stories, was built in only 11 months.  That just completely blew my mind considering a 200,000 SF, 10-story office building here in Washington, DC with underground parking typically takes around twice that long to build.

The circumstances surrounding the ESB’s construction were certainly unique in that there was uncharacteristically abundant cheap labor available due to the state of the economy in the early 1930s. Nonetheless, the orchestration of the erection of a building of that scale in such a compressed time frame is nothing short of awesome.

Got any good real estate history or real estate business books to recommend? Please share the titles with the Model For Success community!