To Plan and Engage The Community Best, Practice Crowdsourced Placemaking

There was a recent NYT article about something new and progressive that is going on in the world of Master Development: allowing a community to vote online for which real estate uses it desires to see developed. This crowdsourcing of the proposed mix of uses that could ultimately comprise an area is referred to as “crowdsourced placemaking”. The article spoke of the success that developer Renaissance Downtowns, working with the city of Bristol, CT, is having with Bristolrising.com, a website that allows Bristolites to vote on the future composition their to-be-redeveloped CBD.  This in turn helps the Long Island-based developer decide for which real estate uses it should invest in performing economic feasibility studies. 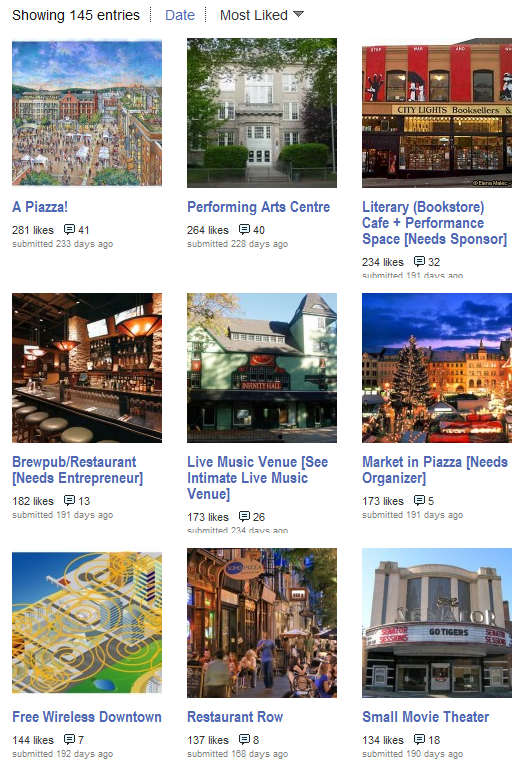 Some of the Bristol community’s most desired uses for a reinvigorated downtown.

It makes perfect sense, and any developer that does not engage the community for the purpose could look uninterested in, or even worse, dismissive of the opinions of the ultimate end users of their contemplated development.

As I have written before, the best developers truly listen to the end users instead of focusing on putting forward what would be an ego-boosting monument to their financial prowess or personal design aesthetic.

I remember when I was in business school and I luckily landed an interview with a developer who had developed a super hip loft condominium building in Soho in NYC that was still marketing units. Eager to ingratiate myself with her, after I reviewed the slick marketing collateral showing the high-end finishes and modern design, I naively gushed, “wow, you have really great taste.” She was kind but firm when she replied: “Well, thanks, but it’s about the customer – you build to the market”.

It’s exactly what Professor Linneman has said since the very first printing of his textbook: developers are in the business of servicing population. Now I get it… then I didn’t.

Renaissance clearly gets it. What do you think about their methods? What other projects have you seen that are doing this? What else have you seen in market that is similar in nature to crowdsourced placemaking?